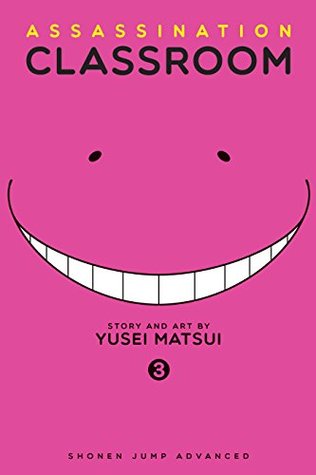 I’m back with another book review and this time I’m reviewing the manga “Assassination Classroom, Volume 3” by Yūsei Matsui! I read the last two volumes in this series before and enjoyed them overall, so I’m happy to pick up another part of this series and read it. Here’s a quick summary so we know what it’s about:

“The latest addition to the misfit students of Class 3-E is a Norwegian robot specially designed to assassinate their teacher—but sadly lacking in social skills. Nothing Koro Sensei can’t cure with a little super-fast tentacle work! When playboy Maehara gets dissed by a girl for being in Class 3-E, revenge is warranted—and Koro Sensei can help with that too! Then Irina, the English language teacher/sexy assassin, gets a visit from her murder mentor.”

This volume contains threats of sexual assault (though no actual assault happens), kidnapping, and attempted murder. Please be careful when reading this manga or skip it entirely.

Plot Development: 4 out of 5 stars

This volume started with first resolving the kidnapping plot that started from the last volume. I enjoyed reading how the students knew exactly how to deal with the situation because Koro-Sensei had already predicted such a thing happening in the first place, and I love how they all worked together. It was also fun to read Red Eye and his attempts to kill Koro-Sensei, only to fail and decide to quit halfway through after having a peaceful chat with Koro. I thought those opportunities helped strengthen character development.

I also thought the addition of scientists trying to create an AI to kill Koro was a fun concept, and I love how she ended up rebelling against them for the sake of her classmates. I wonder how that plotline will ensue in future volumes, though. This volume also ended on a cliffhanger with Vitch and her mentor being challenged by Koro-Sensei to see who is the better assassin. I’m interested in reading more on that plotline in the next volume!

Character Development: 4 out of 5 stars

I really enjoyed reading the students. I felt that they were more active and with each new volume, I think I learn a bit more about them. Vitch and Red Eye were also fun to read. Vitch has a lot more development in this volume, as she adapts to her teaching habits while also struggling to make a name for herself as an assassin. Red Eye’s appearance is much briefer since he only shows up in one to two chapters, but I love how Koro-Sensei ended up befriending him.

I also enjoyed reading the new student/robot assassin, Ritsu. Her development from being a killing machine to learning to get along with the students and become a more independent being was fun to read, and I hope to see more of her cooperating with the other students in the next volume.

Overall, I’m rating this manga 4 out of 5 stars!

This was probably one of the series’ strongest entries so far, and I look forward to reading more!